Antanas Sileika is the author of three novels and a collection of linked short stories. He is also the Artistic Director of the Humber School for Writers in Toronto. He will be reading from his latest novel, Underground, at the Vancouver International Writers Festival, on Saturday October 22, 2011 at 8:00pm. He will also be reading, as part of the Lorenzo Reading Series, on October 24 at UNB Saint John, on October 25 at UNB Fredericton, and on October 26 at Saint Mary’s University in Halifax, Nova Scotia. To complete his busy fall schedule, he will appear on November 5 at Bookfest Windsor.

What’s going on in your writing life right now?

It’s hard to concentrate on my next novel with Underground just published this year, but I am nudging forward painfully slowly on a new novel while writing short essays for my own amusement.

A lot like my exercise routine. I put it off and put it off until I feel so lousy I need to start it again, and then I become very serious for some months before slacking off again.

What do you usually eat for breakfast?

Ever since I read that jam sales are falling because people find putting jam on toast too hard, I have begun to eat toast and jam. But I am not helping jam sales – I use my own jam. I like oatmeal occasionally, and love cream of wheat and adore soft-boiled eggs (which are supposed to be dangerously unhealthy now – this is how a writer lives dangerously). I would eat poached eggs often if I could get them without water dribbling onto the toast. [Editor’s note: blot poached eggs on and with paper towels after cooking and before eating them!] 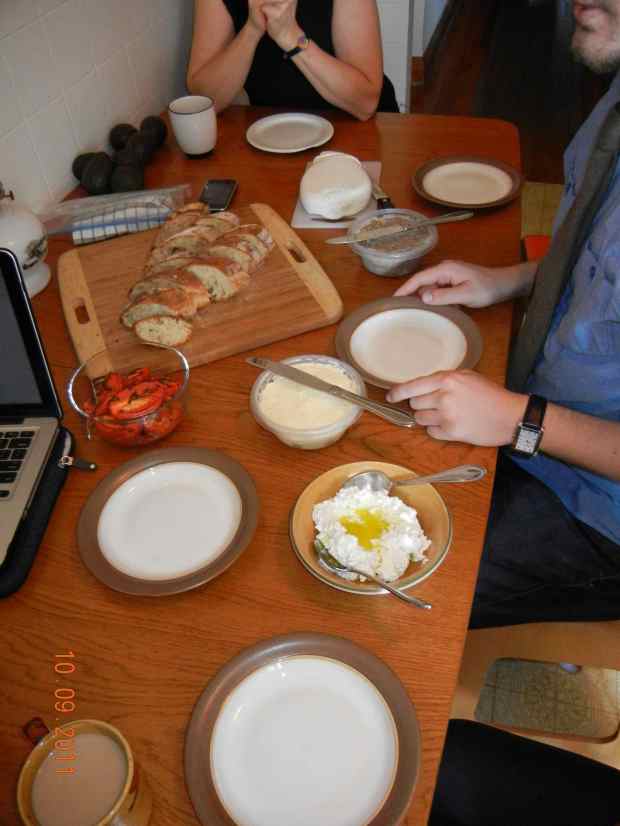 A recent weekend breakfast for Antanas and family

What good books have you read recently?

Aleksander Hemon’s Lazarus Project, Esi Egudyan’s Half-Blood Blues, and Tadas Ivanauskas’s A Apsisprendiu, the latter obscure even in Lithuanian, but fantastically rich and detailed in its depiction of manor life in Eastern Europe before WW1.

What did you eat for dinner last night?

Writing rules you live by:

Not rules so much as questions: How can I say that more succinctly? How little can I interfere in the depiction of a scene in order to lead the reader to make his own interpretation? How can I punish real people I know by using their names or characters for people who end badly in my writing? [Ed: I do this too!] How can I make a reader fall into the work?

I begin to nest in the fall. I stew rough farm apples and preserve some of them in jars to cook with onions and pork tenderloin in the winter – I make homemade butter and farm cheese, Damson Plum liqueur and Mountain Ash liqueur – boil up rillettes to spread on bread and would do more except my wife, Snaige, is taking over cooking now.

Describe a scene or piece you’ve written that features food:

I’m old school on this issue – Le Select on Wellington for French comfort food and ease of access; Bairrada at 1000 College Street in the summer where on the back patio I have eaten suckling pig, salt cod, and Portuguese chickens to be followed by a walk down the street to the Sicilian Ice Cream store; any of the many, many decent Vietnamese Pho restaurants; the fish sandwich restaurant (two tables!) in Little Italy; Caplansky’s on College for old-fashioned Jewish deli food and many, many more: Italian sandwich, Jamaican jerk, and Indian curry holes in the wall.

Three formative books from your youth:

Edmond Rostand’s Cyrano de Bergerac (a play I read as a novel over 100 times)
Hemingway’s A Farewell to Arms
Every single Joseph Conrad in print, but most repeatedly Nostromo

Three formative books from your adulthood:

Dishes/recipes in regular rotation in your cooking repertoire:

Don’t get out of the chair when you are stuck. Stay there.
If it looks horrible, look at it again another day.
Don’t give up at 25 pages. That’s the first hard part in the long process. Push on to 100 before you give up.

What do you do when not writing, eating or reading?

What’s your idea of comfort food?

One thought on “Antanas Sileika Answers the HN Questionnaire”