The two-hour finale makes for a hodge-podge of story lines: Mike works on a class action suit that leads him to his Seattle future, Harvey travels to actual Chicago (not Toronto pretending to be Chicago) to shoot Jessica’s back-door pilot, law firm machinations end with Specter Litt merging with Robert Zane and some of his lawyers,  and oh yeah, there’s a hastily put-together but still glam wedding.

Mike’s last case first: Tall Nathan asks Mike to help him with a suit against a battery making company that contaminated soil near a school, covered up the problem, and is trying to compensate the affected families (children have permanent cognitive damage from lead poisoning) for the measly sum of $60K per family. Nathan needs the fees a large settlement would bring to keep the clinic running, but lacks the manpower to argue the case. With Donna’s blessing, Mike agrees to give of his time. 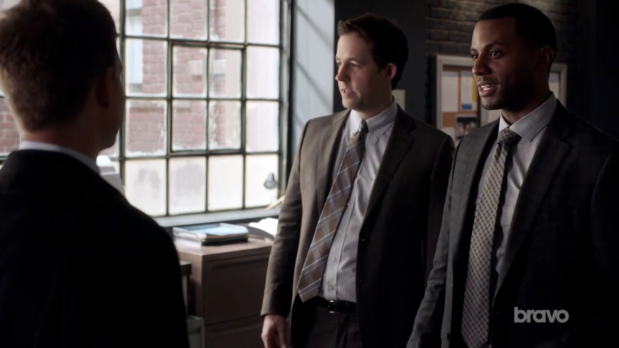 A lawyer named Andy Forsythe waylays Mike in the Specter Litt lobby (like this is not a shady thing to do) and offers Mike & Rachel jobs at a Seattle law firm he’s starting. The firm’s mission: to fight class action suits against Fortune 500 companies. He gives Mike 48 hours to respond (also not at all shady).

Mike pisses off Tall Nathan by refusing a new settlement offer of $100K per family, and forces the case to court. Whoever funds the clinic then withdraws their support. Mike thinks Forsythe is behind the funding withdrawal and gives him shit for his fake job offer ploy. Tall Nathan needs 500K to keep the clinic running. Mike asks Donna for the money from the firm. She says no way, and no wonder she said before that Mike wasn’t ready to be a senior partner if he’s gonna make unreasonable requests like this! But she tells Louis about the situation, and Louis makes an ‘anonymous’ gift to the clinic from his own pocket.

Mike and Tall Oliver keep working the case, and make revelatory discoveries about liability insurance and school grounds beautification projects. In a dramatic court scene, Mike badgers the company president into admitting that the company knew about the contamination and tried to cover it up. Mike gets the company to agree to a settlement of $1 million per family.

Since Forsythe had nothing to do with the case (whoops), Rachel & Mike decide to take him up on his job offer and leave New York very soon. Really because this is the season finale and Patrick & Meghan did not renew their contracts. They also decide to get married in like, 3 days, before the finale ends.

Rachel sees Donna in this nice coat and asks her to organize an elegant but quickie wedding, but we don’t get to see the wedding till after a hell of a lot more story happens.

The law firm crisis: Stanley Gordon brings in a lawsuit from Specter Litt’s former partners. They want to be paid because the firm’s criminal actions damaged their reputations. Alternatively, they will take back their jobs. Harvey divines that Gordon’s ultimate plan is to let someone else takeover/buy Specter Litt, for which Gordon will earn a hefty finder’s fee. And this threat to the firm was triggered by Harvey’s statement denouncing Jessica, which happened because she took the fall for Mike being a fraud, which was Harvey’s fault. 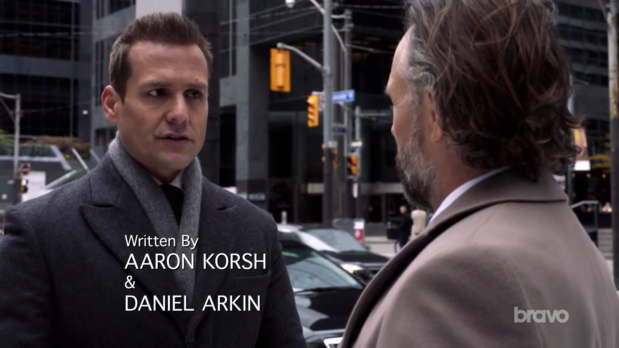 Jack Soloff and his splendidly ratty head of middle-aged long hair return briefly, but he is of little help. Scottie (!) also appears. She refuses to take back anything bad she ever said about the firm. She has said yes to Harvey too many times and regrets it, plus the strapless corset jumper dress garment she’s wearing makes it difficult for her to move. And their romance is not rekindled, though Harvey had previously said they should reconnect when he was done with therapy. Scottie guesses correctly that Harvey has unresolved feelings for Donna, and besides, her time travel show is doing okay over at NBC.

Harvey goes to Zane (his firm employs the lawyers who left SL) for help. Zane resists at first, but upon discovering that his own partners are ready to stab him in the back, he joins forces with SL to defeat Gordon, and part of his firm will merge with SL! This deal is arranged with Louis and Mike (not even a senior partner, and he’s involved in the firm restructuring?) running point, while Harvey is in Chicago helping Jessica. And Zane wants his name to come first in the firm, by the way. Maybe Wendell Pierce will be a series regular in Season 8. 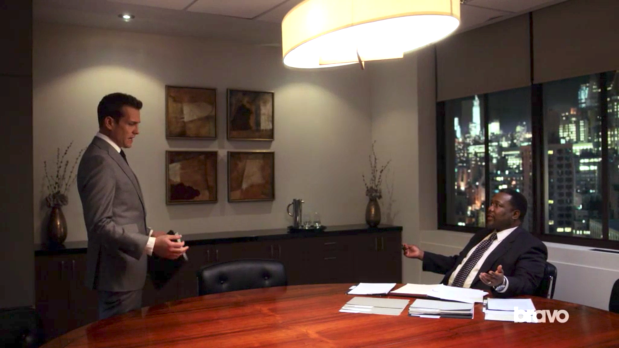 On to Jessica, and the complicated origin story presented here for her as yet unnamed spinoff series. So many new characters! So many ethical compromises Jessica makes! So many gorgeous clothes that Gina Torres wears the hell out of! Despite the beautiful fashions (and Manolo Blahniks), I doubt I will recap the new show when it comes out – it seems too focused on politics and double-dealing for my taste. But here’s what we learn in the pilot:

Jessica moved to Chicago to “make a difference” and to try to reconnect with some poor-ish relations she has there – we meet a cousin and an aunt – about whom she has always felt guilty because she grew up on Park Avenue in New York, and her demanding father did not keep in touch with the relations after leaving Chicago. She is still living with hunky lawyer Jeff Malone in a fancy penthouse, though he appears only briefly.

Jessica begins the episode trying to fight a dirty developer named Pat McGann, who is redeveloping a block of community housing. His initial proposal called for the development to include 35%  low-income housing, but that percentage has dropped to 5%, because McGann could give a fuck about anything but making a buck. Jessica wants to fight him in court but her license has been revoked in Chicago as well as New York, so she asks Harvey to come argue the case for her.

McGann has the mayor in his pocket, and the mayor refuses to meet with Jessica, so Jessica has two enemies,  right off the top. Also opposing Jessica is the mayor’s right hand, a young lawyer named Keri Allen, played by Rebecca Rittenhouse, late of The Mindy Project. It was she who had Jessica’s Illinois law license revoked. She acts tough but is wounded when Jessica accuses her of sleeping her way to her position. Bit of a low blow there, Jessica.

Harvey and Jessica are thrown out of court, her attempt to blackmail the developer fails, and they are both threatened by a menacing thug who turns out to be the mayor’s private muscle. When the Specter Litt crisis, not to mention Mike and Rachel’s wedding, seem to be calling Harvey home, Jessica bids him return to New York to take care of his family. She’ll remain in Chicago to take care of hers, and skip the wedding (Priorities!!). The elusive mayor, name of Novak, finally summons Jessica to a late night meeting on a scary street under the L, and offers her a job working for him if she drops the lawsuit against McGann. Is he totally dirty or just a little? Not sure, but he’s attractive in a gangsterish way, so looks like there will be some sexual tension ahead between those two. Jessica decides to take the job despite Jeff’s warning that to do so will result in her becoming either a crook or dead. Here’s hoping she keeps up her fab wardrobe on a government salary.

And finally, we get to the wedding. 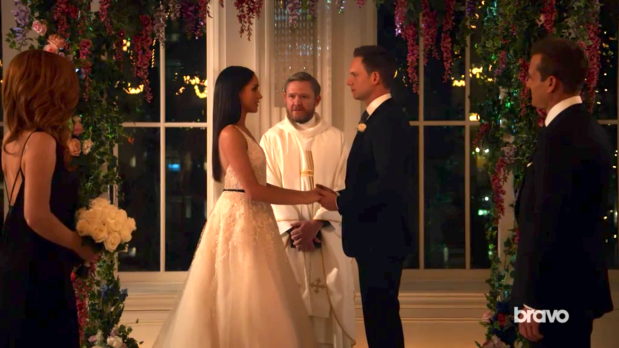 I can’t identify the Toronto location (might be the King Edward Hotel), but it’s dressed and decorated prettily. Though will priests perform ceremonies in hotel-type wedding venues? Don’t they usually require something called a church? Harvey and Donna are the only attendants, and visible among the guests are both of Rachel’s parents, Tall Oliver, Louis, and Sheila Sasz, though none of them speak during the wedding scenes.

Instead, the lines are given to Mike and Rachel’s vows (yawn), and to Mike and Harvey bantering about who is the better or best man, then saying goodbye to each other. And here I confess that this cynical recapper teared up (for like, one second) when they hugged.

Afterwards, Donna checks in on a lonely-looking Harvey at the bar, and he asks her to dance.

And so we end Season 7, and say goodbye to Patrick J. Adams and Meghan Markle forever, or until Patrick comes back to make a Scottie-like cameo some time next year.

Can you believe Season 8 of Suits begins in July already? See you then.

Kim Moritsugu is a Toronto novelist and sometime TV show recapper. Her seventh novel, coming in June 2018,  The Showrunner, is a darkly humourous, suspenseful Hollywood-noir novel about female ambition inside the TV biz that an advance reviewer called a “sophisticated, compelling, and surprisingly complex drama.” Check out its book trailer here: