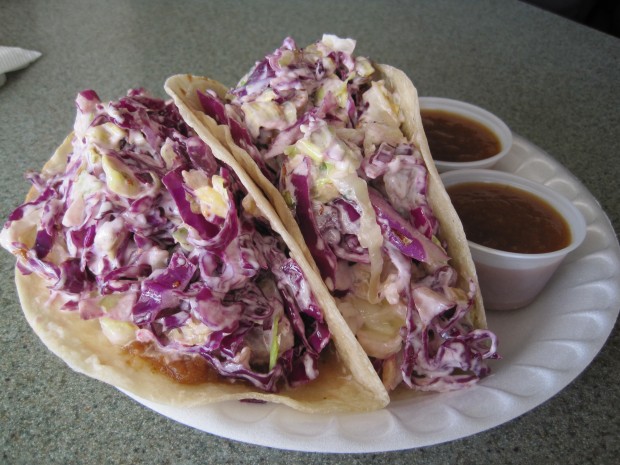 The best meal I ate during my trip to Kauai consisted of some shrimp tacos from Island Taco, a casual storefront operation in Waimea on the island’s west shore, with a true dat tagline: Local Flavors in Homemade Tortillas.

Shown above are Island Taco’s Seared Wasabi Ahi tacos: two homemade flour tortillas filled with seasoned rice, shredded cabbage, cheese, salsa, seared ahi (tuna), and wasabi aioli. I hadn’t known before going to Hawaii that such a Japanese-French hybrid condiment as wasabi aioli existed, but despite being a Japanese-French hybrid myself, I wasn’t a fan of it: I prefer my wasabi unadulterated by mayonnaise.

However, the shrimp tacos from Island Taco – also filled with cabbage, rice, cheese and a chutney-like fruit salsa – were excellent, unlike any I’ve tasted elsewhere, and a great way to celebrate the end of a two hour long (there and back) hike in Waimea Canyon to see awesome canyon views at the foot of a pretty waterfall: 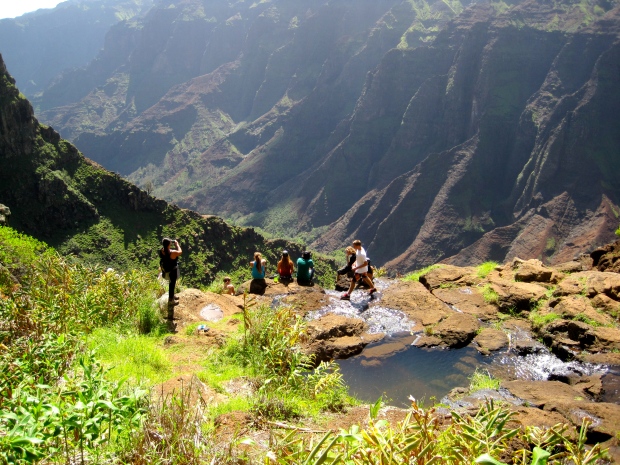 Back home, I created my own cheese-less version of the Island Taco shrimp taco – with satisfyingly sweet and savoury results that remind me of good times and good food in Kauai every time I make it/them. The recipe is below. 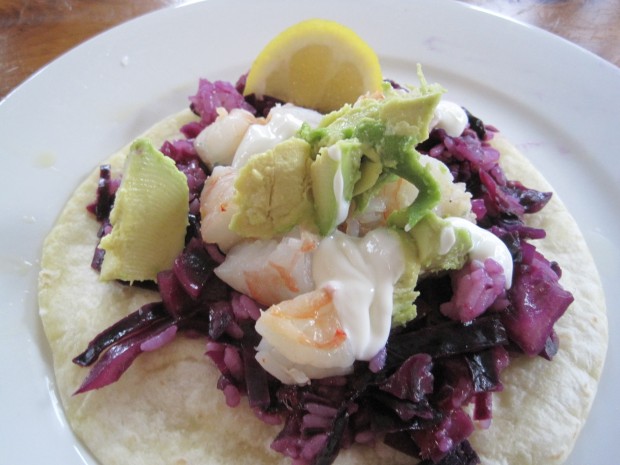 1. Sauté shrimp in skillet in 1 Tbsp. canola oil 1-2 minutes over medium-high until mostly pink. Add a splash of white wine and a a generous squeeze of lemon juice, cover and let steam cook for another 1-2 minutes until cooked through. Remove from heat and chop into large chunks. Rewarm briefly before serving.

3. Add shredded red cabbage to skillet and stir around until it starts to look glossy. Add about a 1/4 cup water and continue to cook over medium high heat for another few minutes until water boils off and cabbage is tender. Stir in cooked rice and chutney until both are well-distributed throughout cabbage mixture, and cook another few minutes to allow flavours to mingle.

4. Heat a tortilla briefly in a dry skillet over medium high heat to make it slightly crisp and browned but not stiff.

5. To assemble shrimp taco, pile some cabbage/rice/chutney mixture on tortilla, add chunks of shrimp, and serve with sliced avocado and sour cream to taste.

Makes 6-8 tacos depending how high you load them.

The food: egg dishes to love 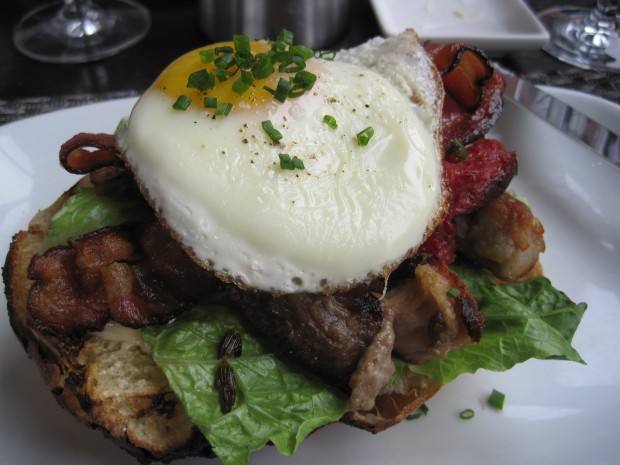 While in New York recently, my husband E and I went to Colicchio & Sons in Chelsea for brunch on a Saturday after a walk on the High Line. 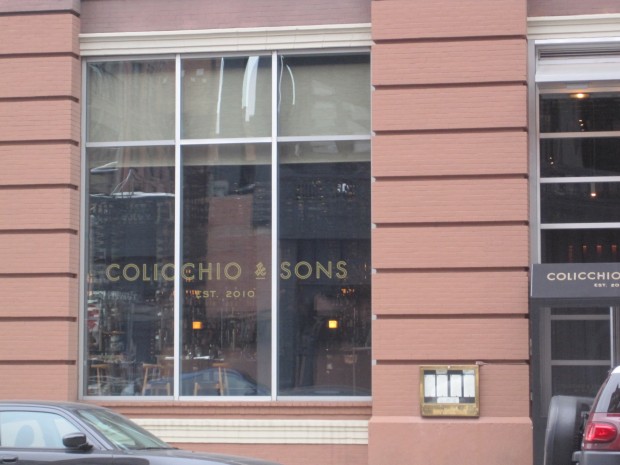 We made a reservation for noon but there was no need. The large two-storey room – lavishly decorated with, among other things, a floor-to-ceiling glassed-in display of bottles of wine – was empty when we arrived. As soon as we sat down, the over-attentive waiter asked what kind of bottled water we would like to start with – still or sparkling, and when I said that tap water would be fine, his lip definitely curled.

Undeterred by the lip-curling and his hovering, we ordered a meaty “BLT-E Sammie with Pork Belly, Oven Roasted Tomato, Lemon Mayo and Fried Egg” for $16 (above) and a vegetable-centric “Ricotta, English Pea and Caramelized Onion Frittata with Wildflower Honey & Arugula” (below) for $12. 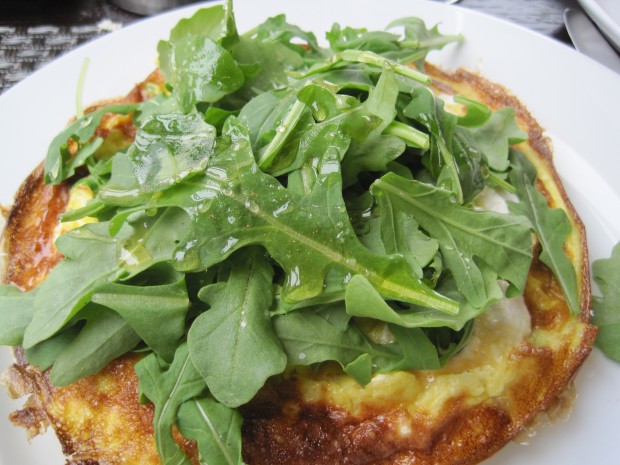 Both these assemblages tasted as delicious as they sound, with the elements in each dish being of impeccable quality. Especially the succulent and tender pork belly in the open-faced sandwich and the fluffy, creamy ricotta that was layered between the arugula and the frittata.

To gild those two lilies, we also ordered sides of roasted vegetables ($5) and wood-fired potatoes ($6). They came from a large wood-fired oven situated on one wall of the main dining space, and were a nice savoury complement to the egg dishes. 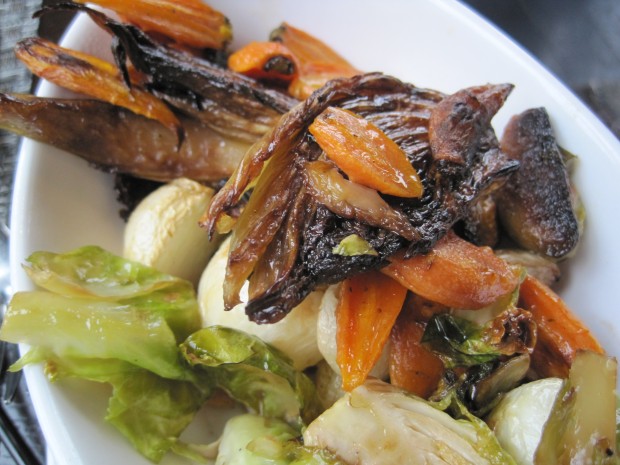 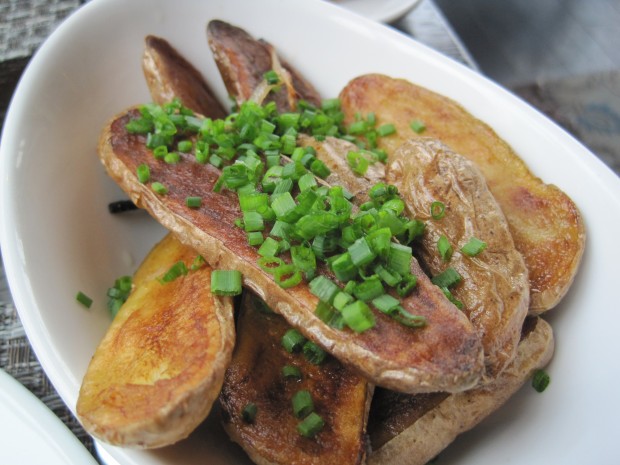 Back home in Toronto a few weeks later, I was inspired by the memory of that frittata with ricotta to make my own version of some creamy stuffed Chard and Saffron Omelettes from Yotam Ottolenghi’s cookbook Plenty: Vibrant Vegetable Recipes From London’s Ottolenghi. 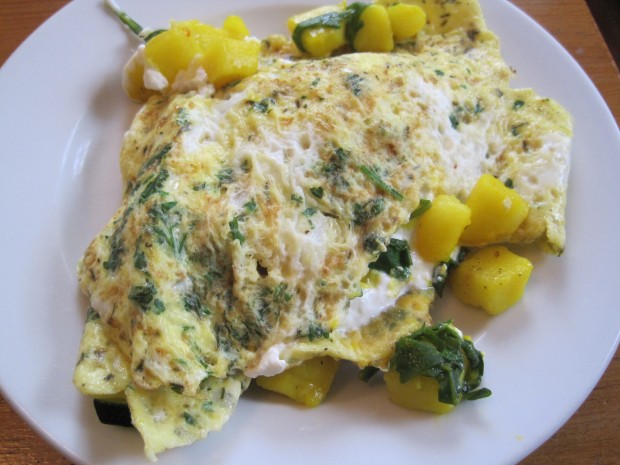 The original Ottolenghi recipe calls for swiss chard and creme fraiche. I substituted arugula and Greek yogurt (sweetened with a tablespoon of honey) for those ingredients, but I otherwise adhered to Ottolenghi’s methods, including cooking some diced potatoes in saffron water to give them an enticing golden hue and saffron flavour. The herb-flecked omelettes made a lovely light meal that I will make again in the coming months to hold me over until I can return to New York to eat the good food – and drink the good tap water – at Colicchio & Sons. 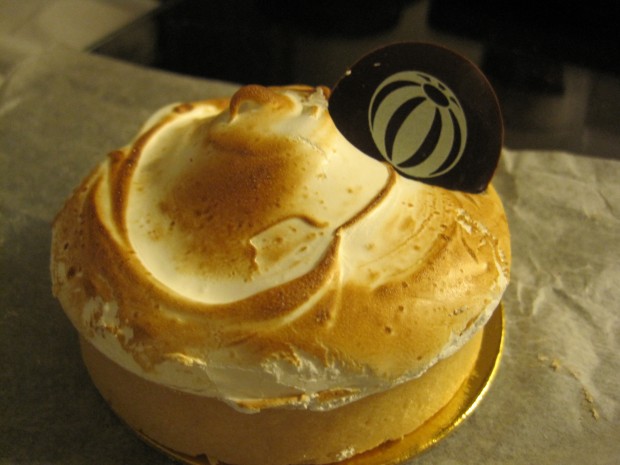 I like finely crafted desserts as much as the next food obsessive, but I balk at a price of more than five bucks for one serving. And I scoff when presented with a restaurant dessert menu that lists items costing $10-$15. Hah! And no thanks.

This professed frugal attitude does not explain why I purchased an individual Bouchon Bakery lemon meringue tart at the SoHo Dean & Deluca store during a recent trip to New York, and willingly handed over $8 for it. I guess I was swayed by how pretty the tart looked (above). And because it seemed big enough to split in half and eat on two separate occasions in one day – once after lunch, and once after dinner. Or so my rationalization went. 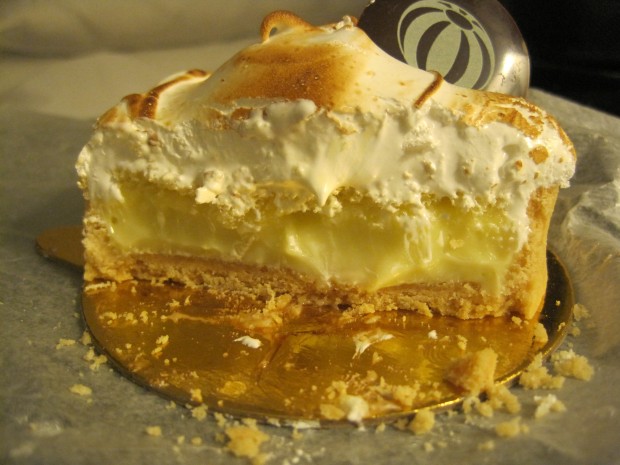 I actually did end up portioning this tart out over two occasions. Partly because upon tasting it, I was disappointed to find it did not constitute my idea of lemon meringue tart perfection. The lemon filling was generous, tart, and sweet, and the meringue was nicely textured (soft and airy inside, a whisper-thin browned crust on the outside), but I did not care for the crumbly cookie-type base on the tart, being more of a classic pastry fan.

Back home in Toronto, I was charmed by both the price (only $4!) and lovely look of the individual lemon meringue tarts sold at Bobbette & Belle, a beautiful Leslieville bakery cafe devoted to artisanal pastries and high-end, custom made special occasion cakes. 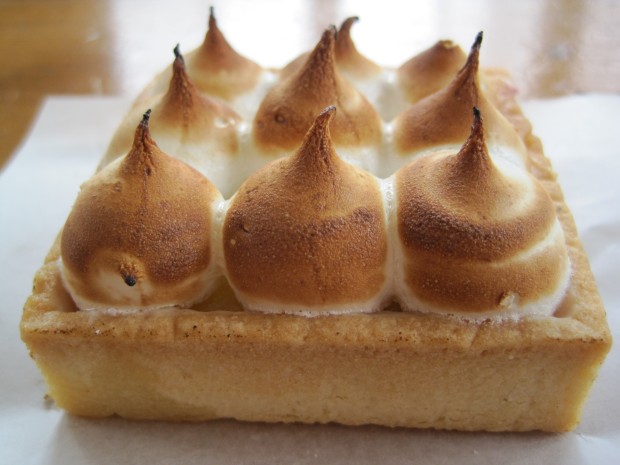 The tart was almost as pretty as the store, but when I cut it open, I had another disappointment: 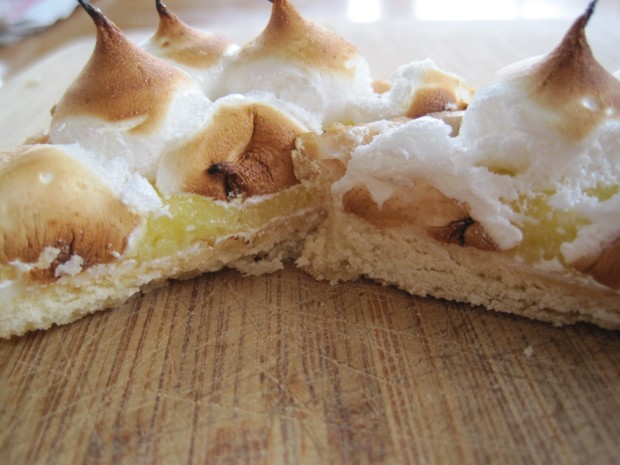 the layer of lemon curd was too thin to make any flavour impact.*

The winner, then, in the first round of the international lemon meringue tart wars that I will heroically continue to wage – and make caloric sacrifices for – in the coming months, is the $7 lemon meringue tart from The Canadian Pie Company shop/cafe on Queen Street East in Toronto. 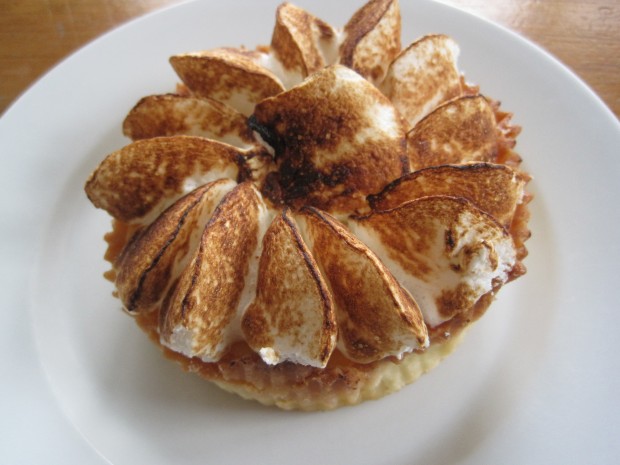 This tart has it all: a pleasingly flaky pastry shell, generous layers of exemplary lemon curd filling and meringue, and a pretty, hand-crafted appearance.

The $7 price is a bit out of my range, but the tart can sometimes be found for $6 at Toronto’s Evergreen Brickworks Farmers’ Market on Saturdays, and either price can be justified according to the make-one-serving-into-two rule. Provided you’ve got the iron will to exercise that rule, that is.

*By the way, Bobbette & Belle’s blueberry scone, served with butter, was very nice: 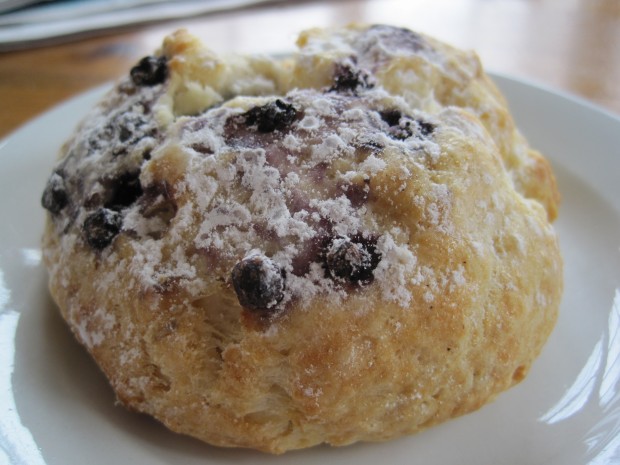